Mikel Arteta reportedly wants to sign two more midfielders before the end of the transfer window.

The Gunners looking to raise cash to fund a move for Lyon midfielder Houssem Aouar.

But they have rejected a bid from Atletico Madrid to take Lucas Torreira on loan with an option to buy.

Arsenal are hoping to sell the Uruguayan on a permanent deal but Atletico need to sell players first.

Defenders Sokratis, Shkodran Mustafi and Calum Chambers have all been linked with moves away from the Emirates.

Sokratis and Mustafi are both targets for Napoli if they lose Kalidou Koulibaly and Lazio are also keen on the latter.

Calum Chambers is a target for West Ham and Newcastle on loan but the 24-year-old is currently recovering from a knee injury.

The Gunners are one of a number of Premier League clubs interested in Reading teenager Michael Olise. Here are some of the latest headlines in the transfer mill today.

Lazio are reportedly looking to prise Shkodran Mustafi away from the Emirates this summer.

According to Calciomercato, the Serie A side are in negotiations with Arsenal in trying to sign the German center-back. 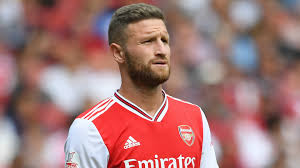 Mustafi – who has one year left on his contract in North London – is not in the plans of Mikel Arteta this season.

It has been said that Arsenal will entertain offers of between £10m-£11m, though Lazio have only offered £9m so far.

If football remains behind closed doors then Arsenal are set to lose over £120 million due to a lack of matchday revenue.

Few clubs make as much money as the Gunners do on a matchday, but that income has been completely lost since the coronavirus pandemic began.

In 2018-19, Arsenal made £96million in matchday revenue alone, a huge proportion of their total £394m turnover.

A reliance on fans to attend matches has left the Gunners in a possible sire situation financially, should fans not return to games any time soon.

Lucas Torreira is in talks with Atletico Madrid with the Spanish club offering a loan-to-buy deal.

Italian journalist Fabrizio Romano reports that Torreira is desperate to leave the Gunners but Arsenal want to sell now while Atleti would need to offload some players in order to afford the fee.

However, the North Londoners may be hopeful that a deal for Torreira would allow them to sign Atletico Madrid midfielder Thomas Partey for a knockdown price.

Diego Simeone and co have so far been very insistent that Partey will leave if the club receive a bid of £45m and not a penny less.

Torreira is said to be valued at around £22m by Arsenal.

Hello, Nice to meet you. I'm Ken Sylvester, CEO and Founder of ArsenalSocial.com